Our academy endeavours to provide students with a solid foundation in Indian Classical & traditional performing arts. We believe that the skills gained through our teaching format will enhance sense of rhythm, hand-eye-feet coordination & grace that will boost creativity & confidence on the stage.

Dr. Lena Rai-Shetty and Esha Ramesh met at an event and very soon were able to complement their skills as a dancer and singer. They realised that they shared the same passion of imparting the valuable knowledge gained in classical Indian art forms during their rigorous training in India. 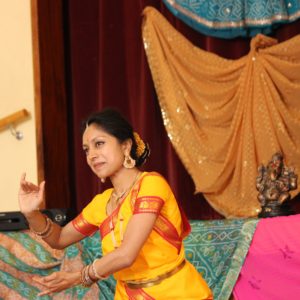 Trained for over 12 years in Bharathanatyam under the guidance of Dr. Kalamandalam Usha Datar, Bangalore, India during which she has obtained distinction in the Indian board exams for Bharatanatyam. She has trained groups and choreographed for >20 years.

Most significant of her stage experiences has been performing to an audience of ~8,000 at the World Bunt Conference, Bangalore, Independence Day celebration event hosted by the Indian Army and National television.

She has taught Bharatanatyam in Hampstead, Harrow & Hillingdon since 2005. Her choreography for stage performances entails classical recitals as well as fusion of different dance forms often portraying various aspects of life. 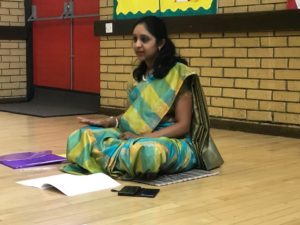 An accomplished carnatic singer and has completed junior in Indian classical music. She has sung in various Kannada serials, movie’s and performed at stage shows as playback, track & chorus singer.

She has been the student head of music department leading the school choir (western), orchestra (played french horn) and band (played bugle) for a period of 3 years. She has also won many state level, Inter-school, Inter-collegiate competitions for both western and Indian music.

You can contact us for more information and register.